TOKYO –  Toyota is introducing a wearable robotic leg brace designed to help partially paralyzed people walk. The Welwalk WW-1000 system is made up of a motorized mechanical frame that fits on a person’s leg from the knee down. The patients can practice walking wearing the robotic device on a special treadmill that can support their weight. Toyota Motor Corp. demonstrated the equipment for reporters at its Tokyo headquarters on Wednesday. One hundred such systems will be rented to medical facilities in Japan later this year, Toyota said. The service entails a one-time initial charge of $9,000 and a $3,200 monthly fee. The gadget is designed to be worn on one leg at a time for patients severely paralyzed on one side of the body due to a stroke or other ailments, Eiichi Saito, a medical doctor and executive vice president at Fujita Health University, explained. The university joined with Toyota in developing the device. 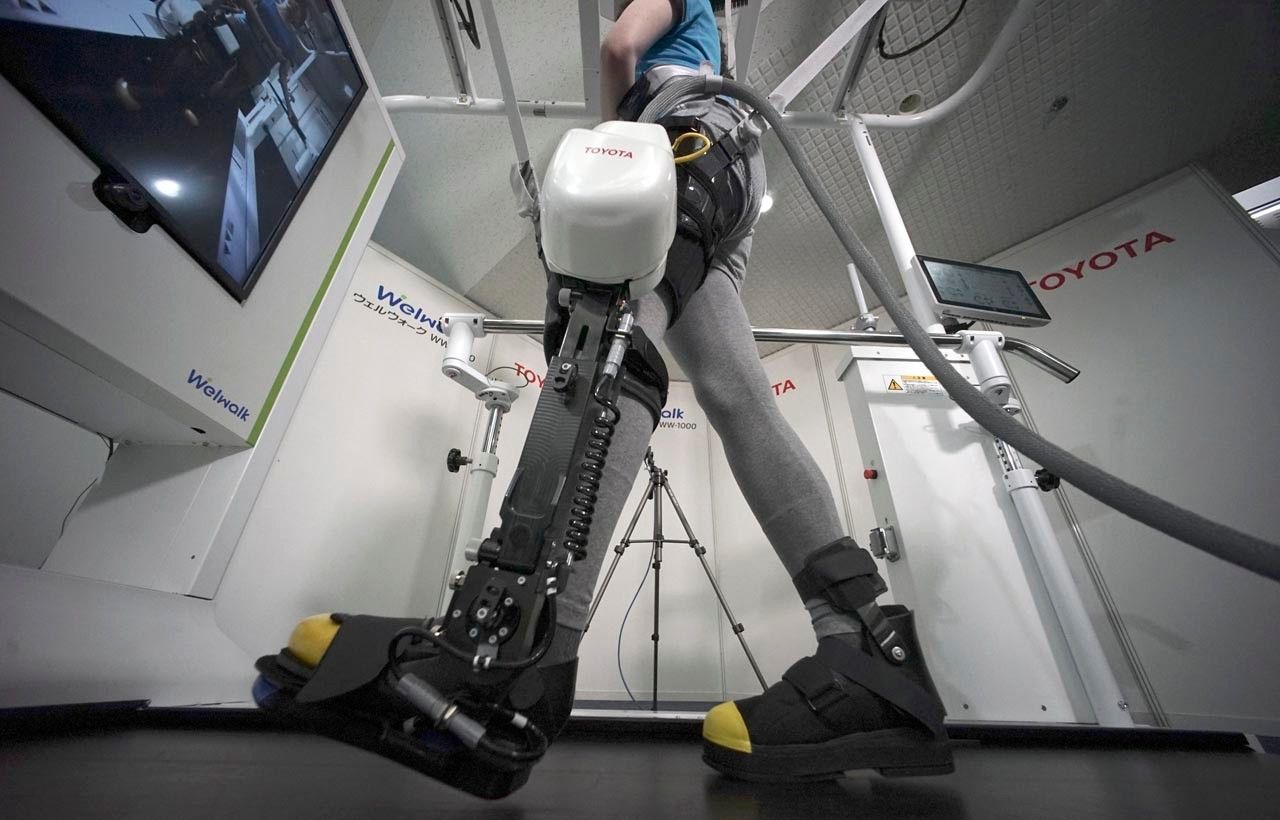 A person demonstrating it strapped the brace to her thigh, knee, ankle and foot and then showed how it is used to practice walking on the treadmill. Her body was supported from above by a harness and the motor helped to bend and straighten her knee. Sensors in the device can monitor the walking and adjust quickly to help out. Medical staff control the system through a touch panel screen. Japanese automakers have been developing robotics both for manufacturing and other uses. Honda Motor Co.’s Asimo humanoid can run and dance, pour a drink and carry on simple conversations, while WelWalk is more of a system that uses robotics than a stand-alone robot.

Given how common paralysis due to strokes is in fast-aging Japan, Toyota’s device could be very helpful, Saito said. He said patients using it can recover more quickly as the sensitive robotic sensor in Welwalk fine-tunes the level of support better than a human therapist can. “This helps just barely enough,” said Saito, explaining that helping too much can slow progress in rehabilitation. The field of robotic aids for walking and rehabilitation is growing quickly. A battery-powered wearable exoskeleton made by Israeli manufacturer ReWalk Robotics enables people relying on a wheelchair to stand upright and walk.

Such systems also can aid therapists in monitoring a patient’s progress, Luke Hares, chief technology officer at Cambridge Medical Robotics in Britain, said in a phone interview. “They can be so much more precise,” he said. Previously, Toyota has shown robots that play the violin and trumpet. It plans to start sales in Japan of a tiny boy-like robot for conversational companionship. It is also investing in artificial intelligence and developing self-driving vehicles.

“Our vision is about trying to deliver mobility for everybody,” said Isobe. “We have been developing industrial robotics for auto manufacturing, and we are trying to figure out how we can use that technology to fill social needs and help people more.”